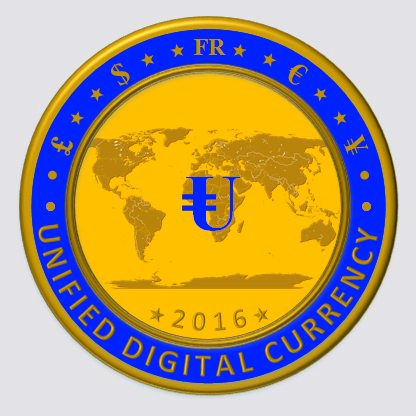 Website: udc.world
This email address is being protected from spambots. You need JavaScript enabled to view it.

Unified Digital Currency or UDC, is a new digital currency, focused on becoming the global exchange medium, by facilitating international commerce, attaining ubiquitous adoption in local commerce and creating a new digital ecosystem that goes beyond the financial aspect.

UDC differs in a number of points with relation to other cryptocurrencies. For starters, it uses 2 separate chains to operate, a Ledger chain that focuses on the currency and monetary operations, and, a Network Management Blockchain (NMB) which deals with the network itself and its participants (network organization/participants registry/Slots allocations/public keys registry/DAS and DAO registry/...) and thus provides a completely open and transparent currency.
Another big difference is in the network's architecture, it is multi-layered and essentially decentralized and distributed at all levels. It isn't forked on any existing currency and, as such, uses an original code base and protocols. And, although the worker node of the network (Validating Node) is still in development, it's nearing completion (refer to the Progress section).

UDC also has a central bank, called WorldBank, which has to responsibility and authority of: On the other hand, the WorldBank does not have the power to perform some other actions such as :
UDC itself is pegged to the 10 most prominent fiat currencies, each selected for their relative importance computed using public formulas and official data, greatly reducing its value volatility. Since the value is pegged to those currencies, it has an extrinsic value and is backed, at all times, by an equivalent amount of fiat reserves.
UDC Currencies Distribution 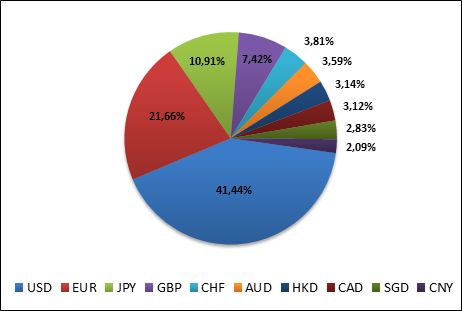 It is also organized differently, purposively made simpler to enable greater adoption for the average person. Addresses are substituted with short, 10-character long, account numbers (3 letters + 7 numbers). They are still cryptographically protected, as each is uniquely linked to an unchangeable ECDSA key pair. Accounts are in turn regrouped into Slots of 1 million accounts, represented by the 4-character prefix (3 letters + 1st number). These Slots will be managed by independent third-parties (Managing Entity), who can activate new accounts, define and receive all transaction fees and through which the transactions are submitted. This allows organizations to become their own payments providers and offer services to their costumers without any intermediary. In exchange, Managing Entities have to operate nodes, thus help the growth and diversification of the network. Any other organizations or individuals can also operate worker nodes, although, this network functionality is designed to be abstracted from the end-user and therefore not required.
In its current specification, the network can use up to 175.760 millions accounts, regrouped into 175.760 Slots. Certain Slots are managed directly by the WorldBank, the official Slots (UDC0-UDC9, DAO0-DAO9 and DAS0-DAS9), while others, are currently reserved, pending institutional opportunities (GOV0-GOV9 and all country codes as defined in the ISO 3166-1 alpha-3).

[1] It is a fully transparent process since it is accomplished through normal transactions, exclusively involving the official account UDC000000

You can read the latest news and announcements directly from our website, this post or any of our social media feeds.
Any other documents or specifications relevant to UDC are also accessible directly through our documentation page .

[2] Unlike other cryptocurrencies, with UDC, transactions don't require additional confirmations when validated and published by the network, and so, they are permanently confirmed even before its Ledger is closed and published. For further explanations please refer to the whitepaper.
[3] Network Management Entries follow different validation processes than transactions and are immediately validated and applied by all nodes.