Why do we choose Scypt PoW/PoS algorithm for ICOBID?
There're two main reasons. The first, we want the voting process on ICOBID platform will be built on a transparent, effective and secured cryptocurrency. The second, both miners and ICOBID holders who contribute to maintain ICOBID network will get a worthy voting weight in ICOBID platform.


Publishing ICOBID source, we would like to speed up platform building process based on the help from ICOBID supporting community. We have deserved bounty for any help and support.

Payouts are every 30 mins after blocks has been confirmed

Our team could solve all products above; however with help from community, we will speed up the project significantly. All of bounties will be distributed after ICOBID ICO crowdfunding ends.

Icobid platform is in the progress of development. The initial coin offering - crowdfunding will be executed to raise fund for the big project. Icobid platform will be the place for anyone to join, share ideas, vote for best ideas and earn from opinion expression.

The birth and development of DAO - decentralized autonomous organization based on top of Ethereum are sastifying someone, some groups and some organizations in attracting investors. The concept of Vote, decentralized Vote from DAOs is being gradually popularized in the cryptocurrency world. Blockchain experienced people could understand the value of DAOs as well as know how and where to use them. However, others  are still vague about DAO and Voting.

DAOs are the execution of the proposals on the ground of voting. Proposal publishing and voting are not complicated to perform but both do not benefit the publishers as well as the voters. Icobid platform has the same simple system to DAOs in publishing proposals and voting; however, it brings clear benefits to all joiners by the actualization of the most feasible and favored proposals through a professional operation which is different from DAOs' Ethereum contract-based autonomous operation.

In terms of ICO, there're tons of ICOs that are running at this moment. However, there has not been any ICOs that you can see real result performed as the roadmap they announced up to now. The main reason is that ICO holders who receive the ICO fund are also the executers of the projects. They can choose to do nothing after collecting enough fund as their sole purpose. The only simple thing they perform their promise is to release a token, a coin. If all of fund from ICOs are held, spent and used worthily for those projects and Devs are just the ones who are hired to perform those projects, the best products for life will come.

Regarding to the project of Waves Platform, its founders promise to build crowdfunding and trading platforms that do not rely on third parties which administrate and maintain them, sacrifice transparency, raise costs and risking loss or friction through reliance on a single point of failure. Waves targets at a decentralized platform that allows every user to issue, transfer, swap and trade custom blockchain tokens on an integrated peer-to-peer exchange. Tokens may represent a share in a crowdfunding project, financial instrument, or any other items with inherent value. If Waves Platform with those ideals above really comes true, you will be easy to publish a token, run an ICO crowdfunding for your own projects and there will be an outburst of ICOs than ever. Anyway, the momentum to achieve good quality projects after each ICO performed there is not established. In contrast, Icobid platform is the place only for meaningful ico-crowdfundings to execute the startup of vote-winning ideas and proposals.

In summary, Icobid platform combines the ease of proposal publishing, voting of DAO and the advanced blockchain-based crowdfunding model of Waves to bring greatest ideas to life.

HOW DOES IT WORK?


I will explain in a simple way:

- You have to register an account at ICOBID page.

- Then your idea will be viewed on a page that collect the ideas from all of users.

- Now which idea that collects the most number of votes within a certain duration will be chosen for Crowdfunding through an ICO.

- Any ICOBID holder can be a voter and the number of votes that holders have is equivalent to their ICOBID balance. Voting will not affect ICOBID balance.

- The initial fund for starting the ICO for the idea chosen is from the total number of ICOBID that collected from all of the idea registered in that duration (Ex. There're 1000 ideas, there will be 1000 ICOBID collected.)

- A token will be created and will delivered 100% to investors of that ICO.

- Fund collected from that ICO will be divided into some categories: 10% for the idea author. 10% divided to all of voters proportional to their votes. 1% divided to all of idea authors that are not chosen for that time. 10% spent for adding ICO token to exchanges. 69% for Dev team to make the idea become reality after ICO following a certain roadmap. 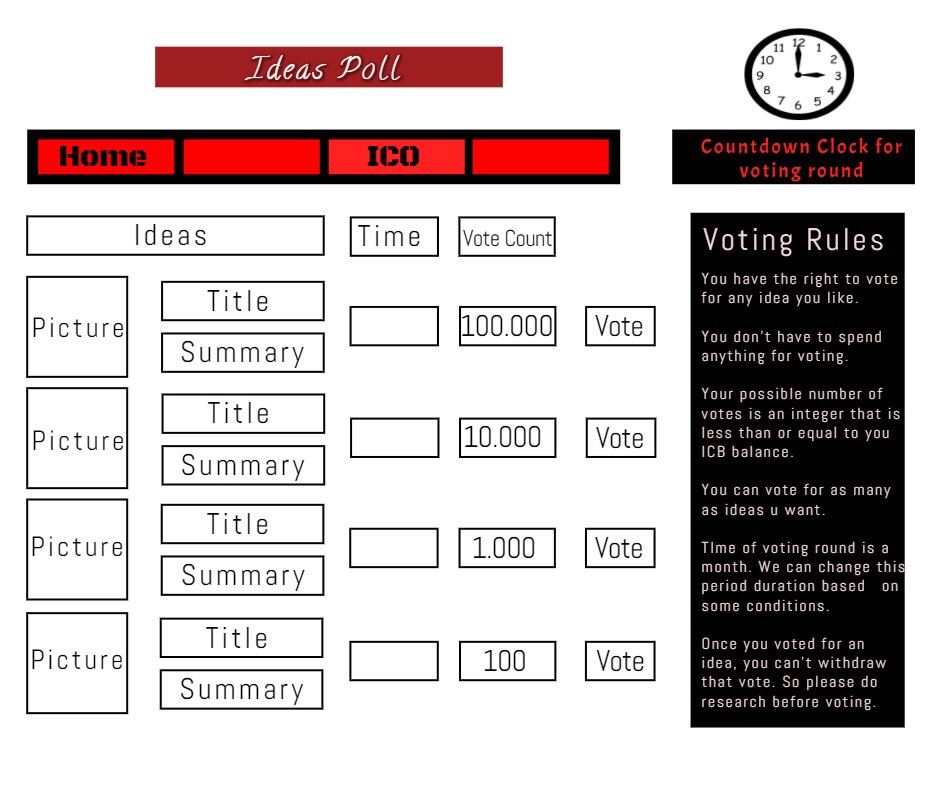 - There're a huge amount of great ideas that are never come true. If those ideas have a great support from a large community all over the world, It will be more easy to be done.
So the idea author will be the individual who benefit when his/her idea become reality.

- ICOBID will be the initial fund for any project. Futher fund will be collected by crowdfunding though perform an ICO.

- ICOBID holders will benefit from their voting. Which vote leads to the wining of the idea will be paid by shares from the ICO fund of that idea. After each ICO done, the ICOBID value will be increased significantly.

- Any individual that have skill suitable for performing the idea will have a chance to apply for job. They will be paid by ICOBID when starting the ICO for that idea and will be paid more (by btc, by money from the ICO fund) when continue to complete the project after ICO.

- Investors will be the ones benefit most. Any executable target of project will be ensured to complete as roadmap. The value of tokens they receive after ICO will be ensured.

WHAT IS THE MOST IMPORTANT FEATURES OF ICOBID PLATFORM?

Pre-ICO BOUNTIES
All infos for receiving pre-ico bounties here:
https://medium.com/@ICOBID/icobid-pre-ico-bounties-e2b5ef7cbedb#.u7ecxdpyo
For Steem followers, bounty will be announced after ICO ends.

Since the pre-ICO phase extends 14 days we also have more ICB for twitter, facebook, slack and signature and steemit bounties campaign (beginning September 1st and ending October 14th, 23:59 EST)
- 30.000 for Twitter, 30.000 for Facebook, 30.000 for Slack and 100.000 for Signature by the same rules above.
- 100.000 for Steemit users who follow us and vote for our announcement on steemit until ICOBID crowfunding ends.


TEAM REGISTER
Contact me if you want to become a member of team. This is a great chance for you to join the founder team of ICOBID. It will be one of the most famous project in the future.

We extend the duration for pre-ICO phase to October 14, 23:59 EST or it will run for approximately 21 days more from now.

We appreciate the early investment thus any investment in this phase will receive a nice bonus following this rule:

The bonus is decreased 1.5% after each day.
When ICO start, the biggest bonus will not be more than 15%.

The address for investment is held by the Escrower - SebastianJu
Read the Escrower's post for full details: bitcointalk.org/index.php?topic=1605034.msg16352041#msg16352041
As always, the investment is done by depositing directly to the escrow address from the address you hold the private key.
ONLY invest after reading my terms regarding how to invest, safety I can provide and refund terms.
By the end of pre-ICO phase, you will need to verify your investment to claim the bonus.

Pre-ICO Phase has ended. Please wait for the ICO to invest. Thank you!