OpenLedger - You are in Control doing it "Smart Trading Decentralized"

Less More
4 years 1 month ago #231 by ccedk_pro
Replied by ccedk_pro on topic OpenLedger - You are in Control doing it "Smart Trading Decentralized"
Let’s Meet in Malta on November 1-2, 2018 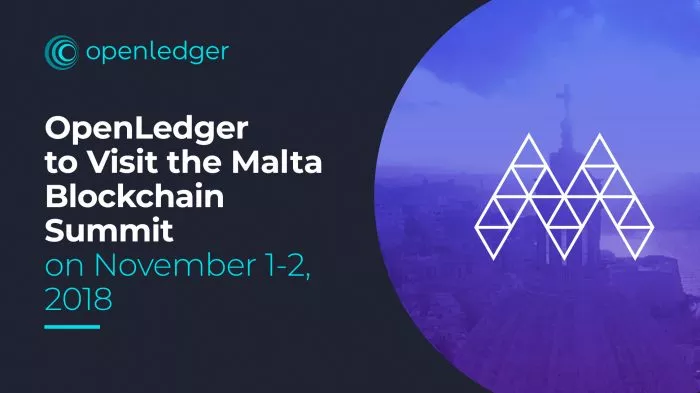 Do you remember that OpenLedger will head for Malta next week to take part in the Malta Blockchain Summit ?

On November 1-2, we will be there together with thousands of other attendees who will come to the event to visit an expo and the Hackathon, be involved in fascinating discussions, and listen to breathtaking ICO pitches.

You are welcome to visit our booth (No. 90) at the Summit to discuss enterprise-grade solutions for real businesses with our team:


Want to book a face-to-face meeting with OpenLedger reps? Send us an email at This email address is being protected from spambots. You need JavaScript enabled to view it..

Less More
4 years 1 month ago #232 by ccedk_pro
Replied by ccedk_pro on topic OpenLedger - You are in Control doing it "Smart Trading Decentralized"
New ICOO Voting Scheduled for November 1, 2018

As we are aiming to become more compliant with international policies, and the ICO services, rendered by our company have singnificantly decreased in last 6 months, we propose a vote on a new ICOO buyback and distribution policy. The Full Buyback proposal:Buyback & Burn of the ICOO tokens on BTC market.

In the beginning of December 2018 and every beginning of the month from then on, we will calculate 2% of the ICOO token Market Cap in BTC ( coinmarketcap.com/currencies/ico-openledger/ ), as we did before. During the first week of each month, we will place an ICOO Buyback order to ICOO/BTC market for the whole amount of BTC.

The price to place an order will be calculated based on the Median Value from the market price in the previous month.

If the order is not closed during the month, it will be cancelled and the remained assets will be put in the new order.

Suppose the Median Value is 100 ICOO for 1 OPEN.BTC in November. We got 1 OPEN.BTC to be used in the ICOO buyback in December. We’ve put an order on ICOO-OPEN.BTC market in amount 100 ICOO to 1 OPEN.BTC. Only 0.5 OPEN.BTC were spent in that order by next buyback in January.

Median Value is 250 ICOO for 1 OPEN.BTC in December. We have collected 2 OPEN.BTC to be used in ICOO buyback in January. We cancel the previous order and add 0.5 OPEN.BTC to 2 OPEN.BTC and place the new order in the amount of 350 ICOO to 2.5 OPEN.BTC.

Especially for this voting, we will create a new voting asset – the ICOO.VOTING token, in the amount of ICOO supply shown in the snapshot.

Start of voting – November 1, 2018
On November 1, every ICOO token holder will receive an incoming payment of ICOO.VOTING tokens, matching the amount of ICOO they own according to the snapshot. Tokens will be sent from the account icoo-voting. In the memo field, each recipient will find the conditions of the voting procedure.

In order to express your opinion, you should send the ICOO.VOTING tokens to the following accounts:

Please check your OpenLedger account on November 1 and express your opinion on ICOO’s future!

Do you agree with the Full Buyback proposal?

On November 30, 2018 15:00 CET we will take the snapshot of the voting options accounts, and make a calculation.

Whichever of the two voting accounts has more tokens will be the winner, and the Full Buyback Proposal will be implemented according to the results of this vote.

Please note: If ICOO.VOTING tokens are not sent to either voting account, they will not be counted. This could be, for example, if tokens are sent to the wrong account, or never sent at all.

After the voting procedure all ICOO.VOTING tokens will be burned.

Less More
4 years 1 month ago #233 by ccedk_pro
Replied by ccedk_pro on topic OpenLedger - You are in Control doing it "Smart Trading Decentralized"
Japanese Version of dex.openledger.io Released

OpenLedger DEX Team is happy to inform you that our website is now available in Japanese. The FAQ page, OpenLedger news and announcements, services and offerings — we translated them all for you!

To access the website in three other languages (English, Chinese, and Korean), use the switcher at the top of the page.

Feel free to subscribe to our social channels in Japanese:

We are doing our best to re-open the STEEM gateway as soon as possible. But it will take some more time before the gateway is fully operational.

Considering the longer-than-expected maintenance caused by upgrades on the part of STEEM, we came to a decision to assist you with STEEM depositing and withdrawing.

To deposit STEEM assets to your OpenLedger DEX account or withdraw them from it, please create a support ticket here . Please note that carrying out of the above-mentioned transactions may take a little bit longer than you expect.

In what it called “guidance on regulatory standards,” the autonomous Chinese territory’s Securities and Futures Commission (SFC) set in motion a series of steps that chief Ashley Alder hinted would culminate in a formal regulatory environment.

Hong Kong differs significantly in its approach to cryptocurrency from mainland China, with cryptoasset exchange and related activities legal, though formal regulation is pending.

“The market for virtual assets is still very young and trading rules may not be transparent and fair,” Bloomberg quoted Alder as saying during a fintech forum Thursday:

“Outages are not uncommon as is market manipulation and abuse. And there are also, I am afraid, outright scandals and frauds.”


Aiming to deliver an outstanding trading experience and ensure the fastest possible transactions, we decided to disable some other gateways.

The following coins will be disabled on our trading platform starting on November 2, 2018
Read More HERE


Aiming to deliver an outstanding trading experience and ensure the fastest possible transactions, we decided to disable some other gateways.

The following coins will be disabled on our trading platform starting on November 2, 2018
Read More HERE


ICOO is a token issued by OpenLedger. Please be aware that we won’t carry out any ICOO airdrops despite all the fake announcements published by malicious individuals across the web and in social media.

All the announcements about ICOO can be found on its official website and OpenLedger’s social media channels:

We apologize for the delay in distributing the airdropped IQ tokens to your accounts. We had to fix some issues EOS gateway issues that were detected by our tech team as well as update the gateway to ensure its smooth work. This not only caused temporary disablement of the EOS gateways but also prevented us from carrying out the IQ token distribution in a timely manner.

The distribution will take place within a two-week period. Please note that it will be based on EOS balances captured by the EOS genesis snapshot tool on June 2, 2018.

Ronny Boesing had a great discussion "Centralised vs Decentralised Exchanges" at Malta Blockchain Summit with Virglio Lizardo JR.
Here is our CEO Ronny Boesing and Virglio Lizardo discussing centralized vs decentralized and how OpenLedger is making the world of decentralized exchanges a more promising place for all the traders! Also, we’re focusing on the importance of BitShares and price-stable coins particularly
Hope you were there, but in case you've missed this, we are publishing this video!

If you believe OpenLedger and its OpenLedger DEX product is on the right path to promote the entire BitShares ecosystem - don’t forget to vote for us!